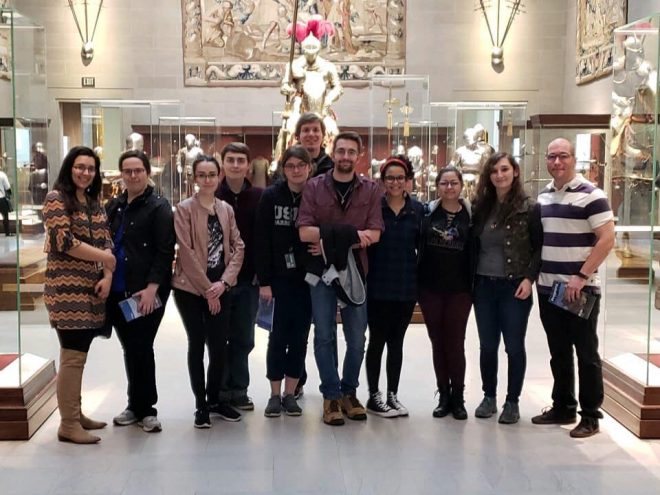 The William I. Shorrock Award and the Marjorie S. Shorrock Graduate Student Award are testaments to the Shorrock family’s long, deep connection with the Department of History. Professor William Shorrock came to CSU in 1969 and retired in 2005 after a distinguished career as a professor and administrator. As an administrator, Bill Shorrock never abandoned his love for students and the classroom. He joined the staff of the Provost’s office in 1988 as an Associate Provost but continued to serve as Graduate Director that year. Over the years he advised students, served on MA thesis committees, and continued to teach regularly. His untimely death was a loss to the entire university community. Through the generosity of Marjorie S. Shorrock, a longtime friend of the department and wife of Bill Shorrock, these two awards continue to recognize and support outstanding undergraduate and graduate students. This year the William I. Shorrock Award winners are Matthew Manfredi, Kelsey Sagraves, and Tyler Stevenson, and the Marjorie S. Shorrock Graduate Student Award goes to Toni Berry and Cory Ross.

Matthew Manfredi came to CSU by way of Concordia University in Nebraska. In spring 2019 he declared his major as Social Studies and also began pursuing a minor in Psychology. This semester Matt enrolled in Professor Donna Whyte’s course “Ghana, the African Slave Trade, and the African Diaspora.” Professor Whyte writes that in spite of the challenging transition to remote learning, Matt has remained “focused, persistent and committed to exceptional performance” even as he “had the added experience of a shortened season as a member of CSU’s lacrosse team.” Professor Whyte adds that she anticipates that the results of Matt’s “research and perspective” on the impact of Kwame Nkrumah’s legacy on present-day Africa and the African Diaspora. “will enhance our knowledge of Nkrumah significantly.”

Kelsey Sagraves transferred to CSU from Cuyahoga Community College and is pursuing a Classical Studies minor in addition to her History major. Kelsey has demonstrated a passion for ancient Greek, Roman, and Persian history and availed herself of practically every available course in these areas. Professor Kelly Wrenhaven avers that “Kelsey is an excellent student and a strong asset to the History department.” Kelsey was no less committed to engaging other subject matter, including in the Introduction to Public History course she took with me last fall. She demonstrated the ability to embrace the nuances of how history is presented and understood in the broader public realm, including the challenges of controversial aspects of the past. Kelsey also played a leading role in forming the new Cleveland State History Club, which met every Thursday morning on the fourth floor of Michael Schwartz Library until the pandemic upended campus activities. The group took field trips to area historical sites along with other history-related activities. As Professor Shelley Rose adds, “When we approached her about the History Club helping with the 2020 banquet preparations, she never hesitated, just asked how they could help.” Although the banquet had to be canceled, we have no doubt that Kelsey’s eagerness to participate in the life of the department will be present when we’re able to return to campus.

Tyler Stevenson, a double major in History and Social Studies and a Political Science minor, transferred to CSU after completing some courses at two colleges in the Pittsburgh area. Tyler had the opportunity to conduct research virtually alongside students from Maseno University in Kenya in Professor Meshack Owino’s History of Modern Africa course in conjunction with a National Endowment for the Humanities grant that supported a digital history project that curated sites in Kisumu, Kenya. Tyler’s research resulted in an online story about one of Kisumu’s oldest hotels. In addition to having his work engage audiences on the other side of the world, Tyler is also poised to share his knowledge closer to home. As Professor Mark Cole shares, “Tyler was (very deservedly) awarded, and accepted, a Cleveland Teaching Fellowship for the 2020-21 school year with CMSD [Cleveland Municipal School District].” We wish Tyler every success as he begins his teaching career.

Toni Berry began her college career, like many CSU students, at Tri-C. At CSU she quickly emerged as an able historian. I remember well her astute comments in reading discussions in my public history course. In fall 2017 she was recognized as one of 36 CLASS Outstanding Scholars. After distinguishing herself as an outstanding student, Toni returned to CSU to pursue her master’s in History. Professor Karen Sotiropoulos remembers Toni’s “rambling incisiveness,” including one occasion when “this method [took] her on her journey to 1920s Russia to investigate Afro-futurism and cause[d] her to stare down at the pages of Sarah Haley’s book on women in Georgia’s convict lease camps to say something along the lines of: ‘This book just makes me want to go in there and strangle a few folk.'” Likewise, Professor Shelley Rose lauds Toni’s work on the Gender Studies Resources project, writing that Toni “served as my graduate student editor during the pilot project combing through not only entries from our graduate students, but entries from 40 survey-level undergraduates at our partner institution, Stevenson University.” She adds that Toni “was always upbeat and willing to work through the awkward beginning phases of that project and I’m indebted to her for sure.” Perhaps most impressive, as Professor Kelly Wrenhaven shares, Toni also never neglected to see her as part of a student community and “goes out of her way to help other students.”

Cory Ross arrived at CSU after completing his B.A. in History at the University of Mount Union in Alliance, Ohio. It did not take long for him to Professor Karen Sotiropoulos shares that when Cory served as her Teaching Assistant, she told her undergraduates, “If you want to learn how to write a concise paper, Cory is your guy.” She remembers being taken aback when he submitted his brief response papers in her reading seminar, “only to discover he nailed them in just a few pages.” Professor Cole agrees, pointing out that Cory is always well-prepared for class and that his “insights … elevate the quality of discussions.” In my reading seminar on the Modern U.S. South, Cory has been similarly sharp. His ability to respond to challenging questions by quoting the most germane passages of any given reading has been impressive. Indeed, it has been a pleasure see Cory flourish in a range of scholarly endeavors while in the program. He is equally at ease examining how wars shaped the social, political, and economic contours of the U.S. South and collaboratively curating (with James Blockett) an online history of the Cleveland Buckeyes, an African American team whose 1945 Negro American League World Series victory is too often forgotten, not least because the Indians won the World Series three years later.

Again, congratulations to Matthew, Kelsey, and Tyler on receiving a William I. Shorrock Award, and to Toni and Cory on their Marjorie S. Shorrock Graduate Student Awards!

3 thoughts on “The William I. and Marjorie S. Shorrock Awards”