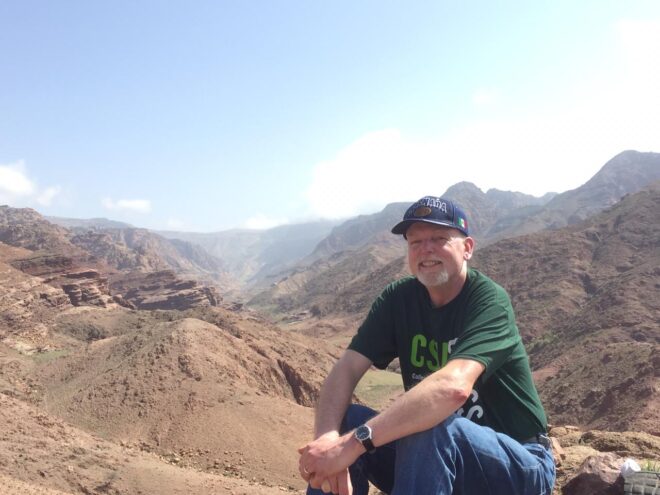 Editor’s Note: The following is a socially distanced interview with Dr. Stephen Cory, who recently returned months early from Jordan, where he was teaching on a Fulbright fellowship until the pandemic forced a sudden departure.

Mark Souther: What plans did have for your trip to Jordan this year?

Stephen Cory: I went to Amman, Jordan, in late August 2019 on a teaching Fulbright fellowship. My appointment was to teach graduate-level courses for the Department for the Study of Islam in the Contemporary World in the School of Shari`a (Islamic Law) at the University of Jordan, the largest university in Jordan. During the fall semester, I taught a class on the History of Relations between Islam and the West. We discussed the ups and downs of relations between Islamic and Western civilizations from the origins of Islam in the seventh century, through the Crusades and other holy wars, medieval Spain, the Ottoman Empire, the colonial period and modern times. During the spring semester, I have been teaching a religion class entitled Islam and Contemporary Issues. In this class we have been dealing with various “hot” topics such as Women in Islam, Freedom of Thought in Islam, Politics, Democracy and Secularism, Islam and Science, and Islam and Holy War. Since we were evacuated from Jordan at the end of March due to the global pandemic, I have been teaching the class online, using Zoom meetings.

MS: For those who have never been to Jordan, can you give a description of some aspect of where you were living that offers a mental picture?

SC: We were living in an upscale neighborhood in Amman, which is the capital and largest city in Jordan. The country of Jordan is somewhat small, with a population of around ten million people, in a territory of around 92,000 square kilometers (approximately twice the size of Ohio). Most of the country is desert and rather sparsely populated. The vast majority of the population lives in Amman, the northern part of the country, and the Jordan river valley. Amman is at a fairly high altitude and spans over 19 hills. In the winter, it can get chilly, falling down to the high 20s (and sometimes getting snow). It is built on the location of an ancient Biblical site called Rabbath Ammon, home of the Biblical Ammonites. Later it was the Roman city of Philadelphia, from which there are a number of remains including a Roman theater and ruins from the temple of Hercules. However, since Roman times, it was neglected and remained a small town until the twentieth century when the emirate of Jordan (governed as a mandate by the British) selected Amman as its capital. In ninety years, the population of Amman has grown from 10,000 to over 4,000,000 inhabitants. Thus, the city combines ancient landmarks with a relatively modern layout and infrastructure.

MS: When the COVID-19 pandemic suddenly became a crisis, how did you go about evacuating?

SC: Although Jordan has not had a large number of coronavirus cases, the country has taken an aggressive stance towards keeping the virus under control. In early March, when the virus was spreading quickly around the world, the Fulbright program in Jordan assured us that they did not expect the program to be cancelled. With that news, my wife and I went on our anniversary trip to a beautiful nature reserve in southern Jordan. We were literally in the middle of nowhere when we first heard that the Fulbright program had been cancelled globally and all Fulbrighters were being encouraged to leave the country as soon as possible. Within twenty-four hours, however, we also heard that Jordan had closed its airports to both incoming and outgoing traffic. Nevertheless, the United States Embassy was eventually able to make arrangements to provide charter flights for Americans to leave the country. After enduring a week of lock-downs in our apartment (during one three-day period no one was allowed to leave their home at all, under threat of arrest and up to a year in prison), we were able to obtain seats on one of the chartered flights and leave Jordan on March 27. This was three months before the scheduled end of my Fulbright appointment.

SC: I was disappointed to have to leave Jordan three months early, especially because most of our planned travel was to take place during those last three months. Nevertheless, it was a great experience, during which I got to know a wide variety of Jordanians, including academic colleagues, students, professionals, and neighbors. I feel that I have come to know the country and its people in a deeper way than I previously did, even though I have lived in Jordan before. In the fall semester, I was able to sing Arabic and English language songs in a Christmas choir, consisting of a group of Jordanian Christians (and some Muslims; Christians make up some 2% of the Jordanian population). My wife and I participated in an English language program at the university called American Corner, and we got to know a number of Jordanian students. Most of my students in the school of shari`a were very religious, and I enjoyed discussing topics of faith and history with them, while encountering perspectives that were quite different from those of most CSU students. It was particularly interesting to be overseas in the midst of a crisis, and to be able to contrast how Jordan has dealt with the crisis with the manner in which the United States has handled it. I believe it is a great experience for Americans to live overseas for an extended period and I highly recommend the Fulbright program and other similar programs to any student who is interested. It will change the way that you view the world and the place of the United States in it, and it will likely shatter many of the stereotypes you have about the rest of the world.

MS: Thank you for taking the time to share your experience, and welcome back to Cleveland!