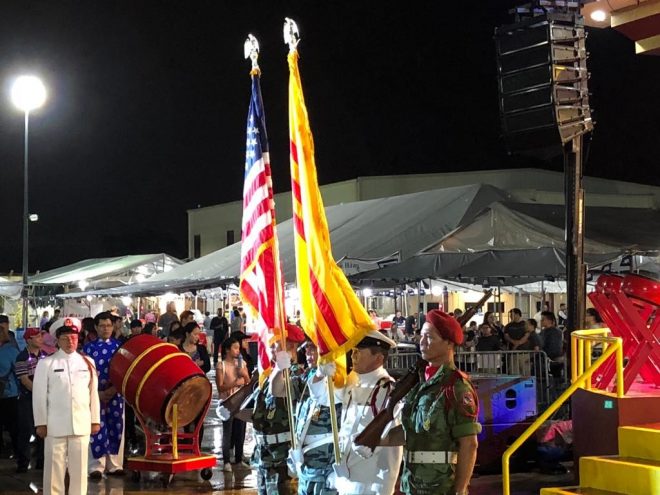 Editor’s Note: This guest post is by Dr. Stephanie Hinnershitz who spent the 2017-2018 academic year on fellowship at West Point where she taught courses in American history, worked on online educational resources, and conducted oral history interviews with Vietnamese refugees.

But out of deference for our hosts we kept our feelings to ourselves, sitting close to one another on prickly sofas and scratchy carpets, our knees touching under crowded kitchen tables…trading stories heard second and thirdhand about our scattered countrymen. This was the way we learned of the clan turned into slave labor by a farmer in Modesto, and the naïve girl who flew to Spokane to marry her GI sweetheart and was sold to a brothel…and the ex-Ranger who bought a gun and dispatched his wife and two children before killing himself in Cleveland…and the spoiled girl seduced by heroin who disappeared into the Baltimore streets…the devout Buddhist who spanked his young son and was arrested for child abuse in Houston…and the men who had escaped but left wives behind in chaos, and the women who had escaped but left husbands behind, and the children who had escaped without parents and grandparents…sifting through the dirt, we panned for gold, the story of the baby orphan adopted by a Kansas billionaire…or the boy accepted to Harvard from Fond du Lac, the soil of Camp Pendleton still in the tracks of his sneakers…so it was we soaped ourselves in sadness and we rinsed ourselves with hope….

– The Sympathizer by Viet Thanh Nguyen

Viet Thanh Nguyen’s 2015 Pulitzer-prize winning novel, The Sympathizer, chronicles the journey of a half-French/half-Vietnamese mole for North Vietnam who also served as a U.S. CIA agent in South Vietnam during the Vietnam War. The narrator eventually finds himself as a refugee in the United States immediately before the fall of Saigon in 1975. He lives in a world of dualities that reflects the author’s own struggles as a Vietnamese refugee trying to make sense of his new in America.

Nguyen arrived in the United States with his family in 1975 when he was four years old. Saigon fell to North Vietnamese forces in April of 1975, but by that point, Nguyen’s family was already searching for an escape route from the devastation of the war and the advancing Communist forces. Nguyen’s father was on business in Saigon at the time, leaving his mother to care for him, his ten-year-old brother, and his sixteen-year-old adopted sister in Buon Ma Thuot. Unable to communicate with his father, Nguyen, his mother, and siblings trekked 150 miles to the nearest port town, Nha Trang, to catch a boat to Saigon. Reunion with Nguyen’s father was brief as chaos engulfed the city. Nguyen’s father ended up separated from the rest of the family while trying to organize transportation to leave and his mother took a risk and boarded a barge with Nguyen and his sibling. (Nguyen’s 16-year-old adopted sister remained in Saigon to tend to the family store, but was forced to volunteer with a youth brigade when the North Vietnamese invaded and seized private property).

Fortunately, Nguyen’s father ended up on the same barge and the family was united as they began their journey from Vietnam. Ngueyn stated in an interview with NPR that his earliest memories of the escape begin when his family arrived in the United States, but many other Vietnamese stopped first in refugee camps in southeast Asia. The United Nations High Commissioner for Refugees funded the camps which were staffed by volunteers from across the globe, including the United States. The Philippines and Thailand were common first-stops for those fleeing the wreckage of the war where officials processed refugees and helped them arrange travel to secondary camps in the United States. These camps were housed at military bases—Marine Corps Base Camp Pendleton in California and Army Fort Indiantown Gap Base in Pennsylvania were two of the largest—and refugees spent their days waiting for a sponsor, or someone who could assist with housing, job connections, and navigating social services provided by the Refugee Act of 1980.

Nguyen and his family spent time at Indiantown Gap before sponsors reached out to help. But the sponsorship was traumatic for Nguyen. His family was split up among different sponsors. There were few takers for a family of four, so Nguyen’s brother went with one family; his parents with another; and Nguyen himself ended up being taken in by two different white families. Nguyen has fond memories of his sponsors, but missed his family terribly. He also remembered a moment when his sponsors were excited to provide him with a pair of chopsticks. The family tried to make Nguyen feel comfortable by presenting him with his own eating utensils that were part of his culture, but Nguyen recounted that he “felt badly” because “at 4 years old, I had no idea how to use chopsticks.” He couldn’t teach them how to eat food like a Vietnamese native. “And that was, I think, my first initiation into the sense of being cultural and racially different than other Americans.” Eventually, a friend of Nguyen’s mother who escaped and settled in San Jose—which had a growing population of Vietnamese refugees and today has one of the largest Vietnamese populations outside of Vietnam—invited the family to come to California and work in her grocery store. Nguyen’s family took her up on the offer, worked in her store for a bit, and later were able to open their own market in Little Saigon. His parents struggled and often worked long hours to make ends meet while Nguyen and his brother helped with bookkeeping. Nguyen’s family made a new life for themselves in America where he tried to make sense of a new identity as American, Vietnamese, and refugee.

What does Nguyen’s experience as a refugee have to do with a Vietnamese double-agent? As it turns out, the two are intricately connected. Themes of the Vietnamese experience emerge throughout the novel. The quote at the top of this post describes outcomes for refugees that spanned the joyous to the tragic and were representative of different trajectories once in the United States. Nguyen’s family was able to become part of a Vietnamese community, but it was not easy. Violent attacks on the store and Nguyen’s family at their home as well as signs put up in the neighborhood declaring “another American business driven out by Vietnamese people” made survival difficult and success unstable. Others faced different circumstances depending upon their experiences with resettlement, a process largely controlled by government agencies looking to disperse refugees in places like New Orleans, Minnesota, and Texas to prevent an overcrowding of refugees in urban areas. In many cases, it was luck of the draw in finding employment and good sponsors. And not all communities were welcoming of refugees. The challenges Nguyen faced in coming to terms with an identity (or identities) which were thrust upon him by war and migration were common.

As a kid, Nguyen attempted to cope by immersing himself in very “American” forms of entertainment. He recalled watching a “Scooby-Doo!” Christmas special and other cartoons. When his family purchased a VCR when he was ten, he fell in love with John Wayne and WWII movies. He “cheered for the American soldiers” until he stumbled upon a movie that challenged his views: Apocalypse Now. When the American soldiers began to kill Vietnamese people in the movie, that was “an impossible moment” for Nguyen. “I didn’t know who I was supposed to identify with, the Americans who were doing the killing or the Vietnamese who were dying and not able to speak?”

Apocalypse Now inspired Nguyen to seek out voices of Vietnamese which were often left out of retellings of the Vietnam War. The Sympathizer was born of Nguyen’s desire to write a good spy novel, but also to complicate the history of Vietnam that has traditionally relied on American views and memories. In a 2019 lecture at West Point, Nguyen explained to cadets and future officers in the U.S. Army that the experiences of his refugee parents were also part of the history of the Vietnam War. People matter as much as battles. The narrator’s experiences in The Sympathizer are fictionalized and fantastic, but they symbolize the range of experiences and potential stories that remain hidden. It’s understandable why many Vietnamese refugees would be hesitant to speak about their journeys and maybe painful memories, but more are doing so, partly because more Vietnamese American historians are using oral histories to craft a complete picture of the Vietnam War—one that doesn’t end in Vietnam.

During the 2017-2018 academic year, I held the American History and Diversity Studies Fellowship at West Point where I taught American history, researched a book on Japanese American incarceration during WWII, and also traveled the country with the West Point Center for Oral History gathering interviews with Vietnamese refugees. From former officers in the Army of the Republic of Vietnam who fought with American troops and spent years—in some cases a decade or more—in North Vietnamese re-education to a Buddhist monk who turned away from a life of violence following his military service, the stories are as varied as you could imagine. Even accounts of the journey to the United States are rich and complex. One of my favorite interviews is with Tania Newinn (she “Americanized” her Vietnamese name, Tuyet Hua) who settled in the Houston area with her husband and her son after a stop at Camp Pendleton. She describes her journey as a refugee in terms of the food she remembers. It took her a while to get used to “American” cuisine, especially the “bland” milk that was served at the camps (most Vietnamese enjoy sweetened, condensed milk in coffee). It wasn’t until fried chicken and oranges were served at Pendleton that she really came around to American food and started to feel more comfortable in her new surroundings. As the experiences of Vietnamese refugees become more fully explored, more narratives will be added and Nguyen’s vision of expanding military history to include those who fled as well as those who remained in Vietnam will be realized.